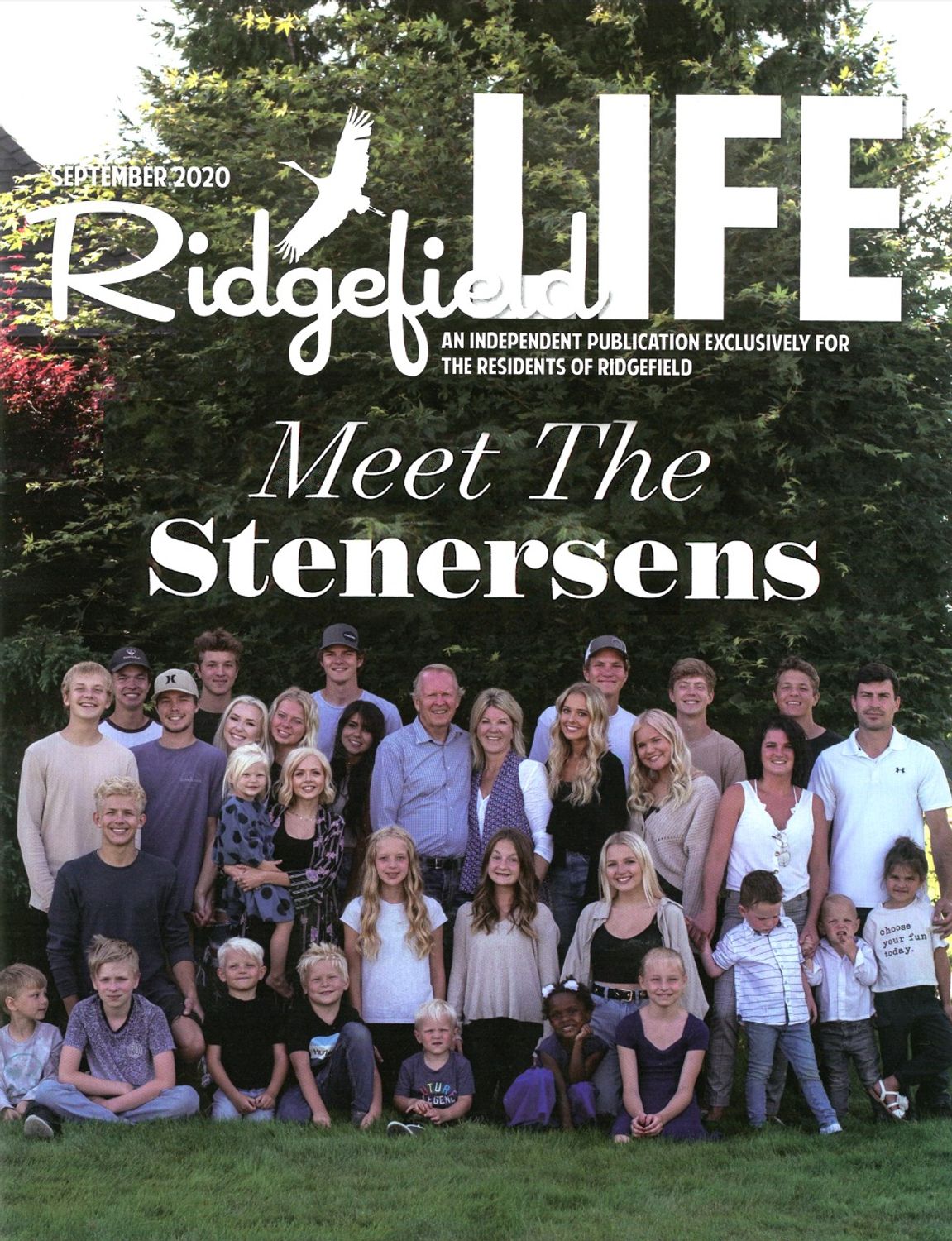 "I know the price of success: dedication, hard work and an unremitting devotion to the things you want to see happen." ~ Frank Lloyd Wright, architect and writer.

Understanding the true value of humility and hard work is not something we’re born with. It is taught with love by and the wisdom of those who came before us. As the journey begins, bringing the knowledge and insight from those who graciously passed the torch our way, we can work hard, persevere, and make our own dreams come true, and then pass the torch onto the next generation. With that gift, the possibilities are truly endless. The most inspiring of success stories are often born from struggle, yearning, and a ravenous thirst to achieve greatness. If you think the American dream is beyond your grasp, or it’s not even achievable in today’s constantly-changing world, then allow me to introduce you to Ridgefield’s Stenersen family.

Family patriarch Lloyd Stenersen and his beautiful wife of almost 50 years, Debbie Stenersen, were both born into large, hard-working families. Lloyd is one of 13 children, and Debbie one of 17.

Lloyd was born and raised in the Pacific Northwest. He was born to a farming family with little education, but he was taught from an early age how to work hard and earn an honest day’s wage. “From the age my father was old enough to carry a bucket he picked berries,” explained daughter Barbara. “At the end of the day he donated his daily earnings as a contribution for being part of the large family. They were migrant berry pickers. In the eighth grade my dad quit school to work full time, helping to support the family.”

Lloyd Stenersen quickly learned that it just wasn’t enough to spend his life picking berries for someone else. He wanted to be the one who owned the land and hired the workers. “He started saving his money,” said Barbara, “dime by dime. He was going to be the farmer.” By age 18 he was out on his own, working hard, and learning the ropes of the construction business, which was all done by hand in those days and much more dangerous.

By age 18 he was out on his own, working hard, and learning the ropes of the construction business, which was all done by hand in those days and much more dangerous.

At age 20, while on the east coast working and living in New Hampshire, Lloyd met and married the love of his life, Debbie. They’ve been madly in love ever since, and early next year will celebrate their 50th wedding anniversary. They have eight children and 34 grandchildren, and they love nothing more than spending time as a family.

But life was tough, at first, as a young married couple with a growing family. When Debbie married Lloyd at 17 they didn’t have much, but over the years he’d saved some money and they were determined to raise their family and make a successful life for themselves. “Dad had a 30-year plan,” explained Barbara. When the time was right Lloyd brought their growing family across the country to Washington, and they bought a century-old farm house on over a hundred acres of farmland. He planned to farm it until the economy started to grow enough where he could eventually subdivide the land and hopefully earn himself a decent retirement. 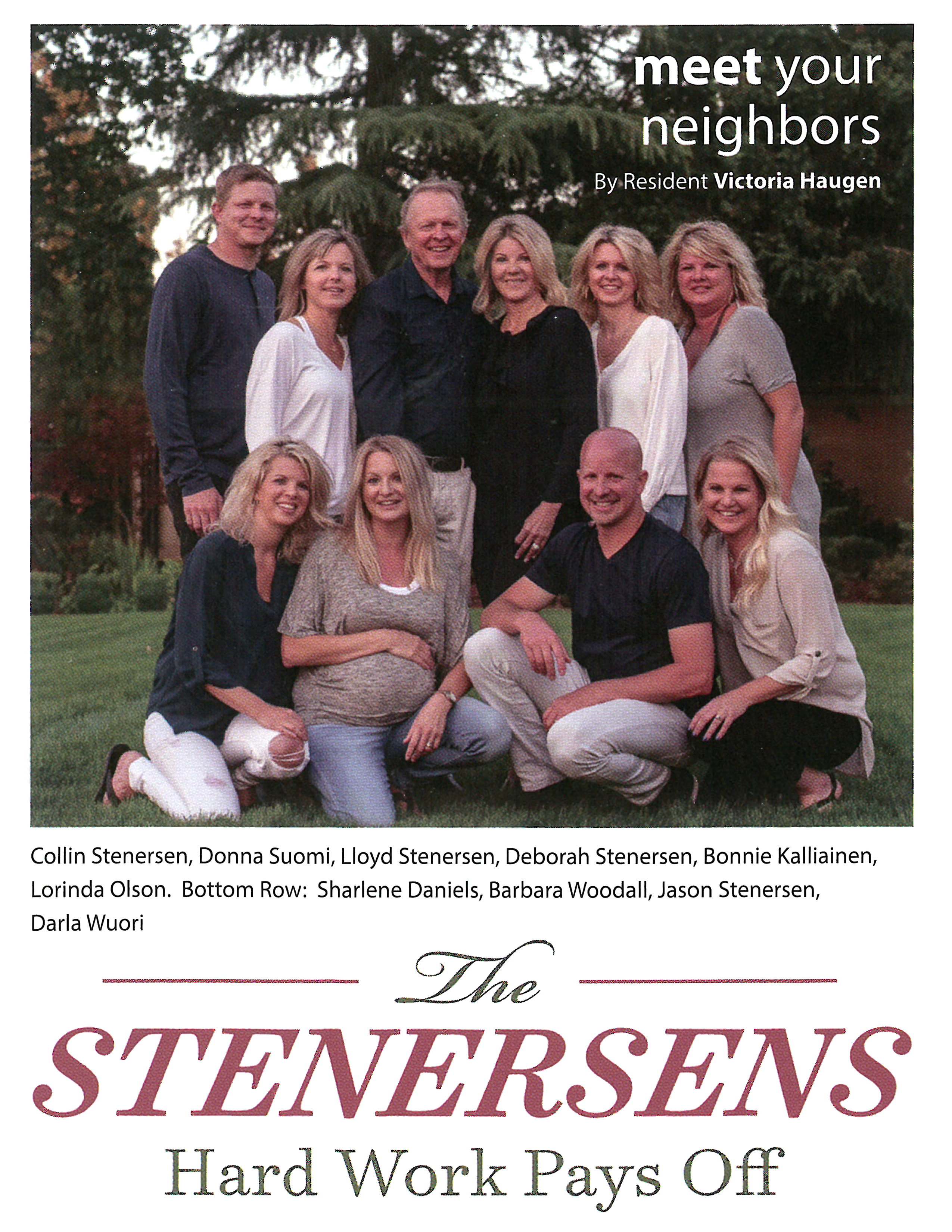 Lorinda, the eldest of the Stenersen kids, was about five years old when they moved into the dilapidated farmhouse. She recalls seeing holes in the floorboards and mice skitting across the floor while eating dinner. They had very little then, but knew the value of hard work and perseverance. Debbie was a housewife with a great talent to clean and decorate, but even she had her work cut out for her with an old farmhouse with Swiss cheese floors. But Debbie’s determination would not be contained. All she had to work with was a chainsaw, milk crates and paint, but if she decided a room needed more light she’d simply grab the chainsaw and cut herself out a window. That’s how you got things done with light pockets, creativity and determination in the Stenersen family. She even made some curtains to decorate the place a bit more, staying up late at night to sew once the family had gone to bed. Until one day, when a light fixture near the curtains caught fire and destroyed the curtains she worked so hard to make, and nearly took the whole house. But the Stenersens’s resolve never wavered; they kept working and stuck to the plan. “Debbie Stenersen is the most talented and hard-working person you’ve ever met in your life,” said Lorinda.

Debbie was born to a very large, loving and generous family in New Hampshire. Her father Marty was an entrepreneur, and in decades past owned one of the top non-union building companies in America. When he finally retired and sold his business, he rented a limo and drove around to visit all of his kids and employees, delivering checks to all, giving most of it away. He wanted to live to see his children spend their inheritance and enjoy it, instead of leaving it after he was gone. When he passed away in his 90’s he had over 400 children, grandchildren and great grandchildren. And his generosity, faith and positive attitude is alive and well in them all, especially his daughter, Debbie.

Lloyd’s love and knowledge of building led him to a long, successful career as a professional custom builder. He built the hugely successful Cascade West Development from the ground up to make it a leading custom home builder in the Portland/Vancouver Area.

Last year they won first place in every category at the Clark County Parade of homes, and have an exceptional reputation for quality and service. He now leaves a great deal of the operations to his team, including several family members, but still remains an integral part of the team.

To show just a glimpse of the Stenersen generosity and well deserved reputation, Lloyd once built a house for a couple, and after completion honestly felt costs came in too low. So he sent the homeowners a check for $20,000, telling them that he made too much and this was a refund back to them. “That’s just how he is,” said Lorinda. “He did deals on handshakes. No one ever says a bad word about Lloyd Stenersen – if you shake his hand, it doesn’t matter what happens, it’s going through.” 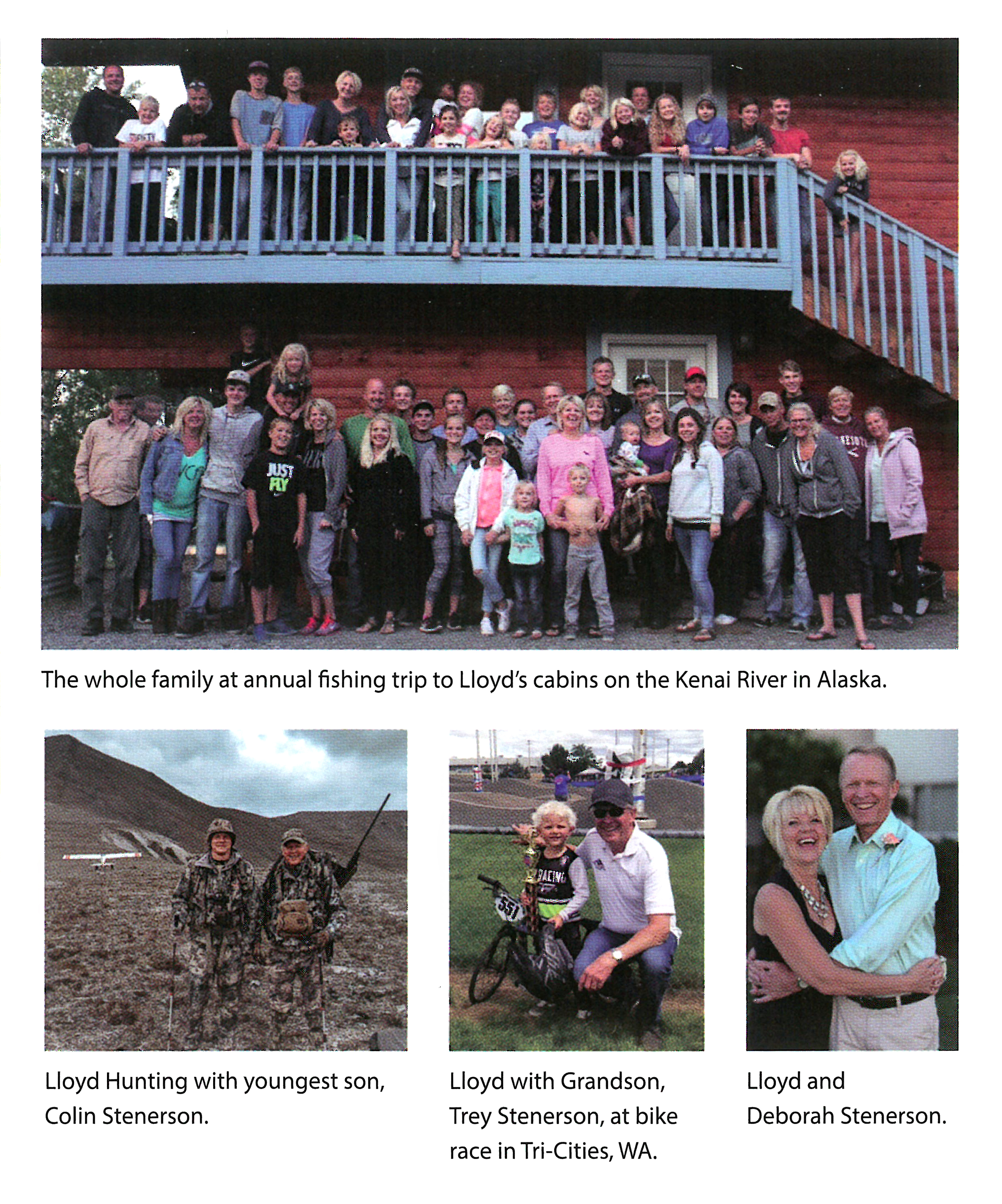 Debbie’s love of decorating eventually led her to a very successful and rewarding career in the field. “Dad ended up entering the Clark County Parade of Homes a time or two,” explained Lorinda. “She ended up decorating one of his homes, and they won. And that was how she realized that she was really good at it.”

During this time Debbie’s younger sister, Heidi Townsend, moved to town, a single mother in need of a job. She shared Debbie’s love of decorating and interior design so they started a small company creating floral arrangements and decorative items in their garage, selling them on the weekends. And that’s how the acclaimed Creative Interiors was born. They ran the business successfully together for several years. With nearly 30 grandchildren, Debbie decided it was the right time to take a small step back. From there, Heidi and her husband, Ryan, have expanded the business and now have a store in Vancouver. Of course, Debbie still loves to decorate, and does take on smaller projects for friends and family, including decorating Lloyd’s model homes.

Lloyd’s next birthday will be the big 7-0, but he shows little sign of aging or slowing down. He remains very active, exercising regularly, hiking, fishing and hunting. In fact, the party’s just getting started.

He recently purchased a ranch with several thousand acres out in Central Oregon. The plan is to eradicate a thick invasion of junipers in the area and restore a sustainable and healthy habitat for native plant, fish and animal life to return and flourish. The ranch sits in an old ghost town outside of Madras with a population under 100. “The store in town is a refrigerator on the neighbor’s porch with a cash box,” said Lorinda. “You feel like you’re in another world.”

When Lloyd and Debbie bought the place the land was overridden with junipers and its only building, the worst house in the neighborhood, was an abandoned meth house. In their haste to exit the front door was left open and hadn’t been closed again for 15 years, and the home had been occupied by every type of plant and animal life in the area ever since. They hired a couple guys in Hazmat suits to come out and clean out the place. Once that was done, they put in a foundation, fixed the well, re-built the house, and now it sleeps over a dozen and has been transformed into true place of beauty. “Now it’s the nicest house in town,” Lorinda jokes. “They see potential where no one else can.”

One of Lloyd’s true passions in life is hunting and fishing. He’s hunted all over, but “his favorite place in the world is Alaska,” beamed Lorinda. He loved it so much he bought some riverfront property right on the Kenai River, ironically, from a man who wanted to build a home in Ridgefield. They made a deal, and Lloyd built him a home in Ridgefield, and in turn took possession of the riverfront property with a small cabin. But with the huge Stenersen family, a tiny cabin simply wouldn’t do. So for over a year Lloyd, with the help of a few family members, framed and built a three-story cabin. Now the property sleeps over 50 Stenersens. Each July the whole family heads up there to spend time together during the salmon run. “Just to know that, at 65 or however old he was at the time, I just get shocked at his talent,” said Barbara. “He spends as much time in Alaska as he can now.”

But as talented and successful as Lloyd has become, he always keeps a quiet and loving spirit. “He’s very humble,” explained Lorinda. “He’s a farmer at heart.”

Most of the Stenersen family reside in the Ridgefield area, which allows them to get together quite often. Lorinda’s and Barbara’s sister, Donna Suomi, co-owns Killa Bites in Ridgefield. Each of the Stenersen kids has their unique gift to bring to the family – from builders to artists to business to religion, they have all the bases covered. “All of us have our own little niche,” said Barbara.

But, to them, it’s not just the individual, it’s all about family. And the Stenersens will always be together.