The Federal Reserve has left little doubt that it will raise interest rates Wednesday (3.15.2017) for the third time since December 2015 to reflect a consistently solid U.S economy. The rate increase will likely go down as one of the most telegraphed ever, given that several Fed officials, including Chair Janet Yellen, each let it be known over the past two weeks that they felt it was time to raise the Fed's benchmark short-term rate. The thinking was that the Fed would want to see whether President Donald Trump's ambitious economic program of tax cuts, deregulation and higher spending on the military and infrastructure could pass Congress — and then assess how it might affect the economy. Now, the guessing switches to how many times the Fed may raise rates during 2017 — whether three times, as the market now expects, or perhaps as many as four. Yet regardless of the answer, the market seems far less nervous about the prospect of rate increases than it was in recent years. Investors seem increasingly confident that the U.S. economy is vigorous enough to withstand modestly higher borrowing rates. 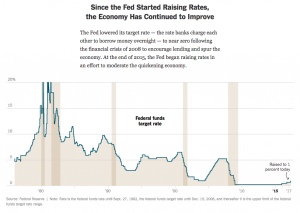 Since The Fed Has Started Raising Rates, The Economy Continues To Improve

After its two-day policy meeting, the Federal Open Market Committee voted to raise the range of the federal funds rate to 0.75% and 1.00%, citing progress in labor market growth, business fixed investment and inflation.

There was one dissent. Neel Kashkari, president of the Federal Reserve Bank of Minneapolis, voted against raising interest rates. The Fed’s statement did not provide a reason for Mr. Kashkari’s vote

“In view of realized and expected labor market conditions and inflation, the Committee decided to raise…the fed funds rate,” the central bank wrote in its statement.

The Fed’s cautious, yet generally positive, economic statement follows a slew of improving data, including better-than-expected ISM manufacturing growth, strong consumer confidence reports and solid payroll gains. The unemployment rate has hovered around 5% for the past year—a level many economists consider to be near full employment.

In its statement, the Fed noted that inflation is “moving close to the Committee’s 2 percent longer-run objective,” but that “excluding food and energy prices, inflation was little changed and continued to run somewhat below 2 percent.”

Consumers and businesses will feel it — maybe not immediately, but over time. 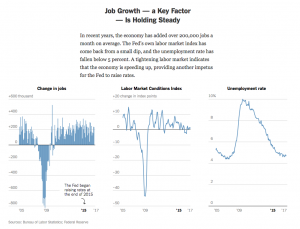 The Fed’s expectations for GDP growth increased slightly to 2.1% in 2018, while forecasts for unemployment remained mostly the same, with officials expecting the rate to fall to 4.5% by 2019. Officials raised their short-term outlook for core PCE inflation to 1.9% this year.

While projections for the federal funds rate rose across the board, the total number of expected rate hikes in 2017 remained unchanged with three quarter-point raises. In December, Fed officials raised their forecasts for the pace of rate hikes after the election of Donald Trump,  which sent inflation expectations surging. 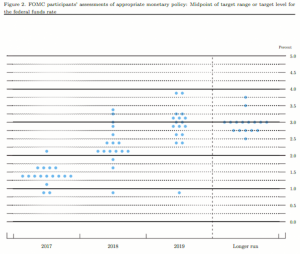 An increased number of Fed officials are expecting to raise rates at least twice more this year.

Only three of the 17 officials who submitted forecasts now expect the central bank to move more slowly. There was a similar coalescing around tighter policy for the following two years, although the median prediction of a 3 percent funds rate by the end of 2019 remained unchanged. 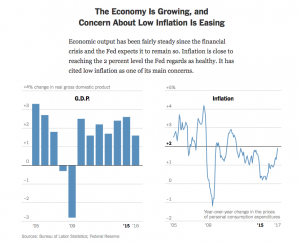 Concern About Low Inflation Is Easing

The rate hike will increase the upward pressure on interest rates that consumers pay, but the immediate effect is likely to be modest. People with credit card debt are likely to see an immediate increase of about a quarter percentage point in their interest rates. The effect on longer-term loans is less direct, but the average rate on a 30-year mortgage rose by half a percentage point over the last year. 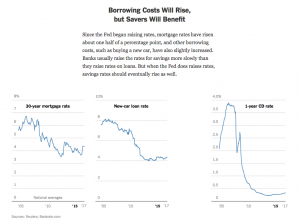 The Fed has concluded that the economy is growing at something close to its maximum sustainable pace. 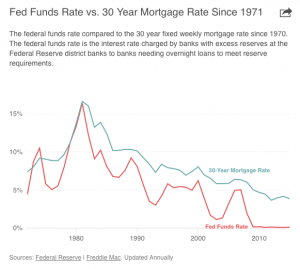 Fed Funds Rate vs. 30 Year Mortgage Rate Since 1971 “That Fed move is already built in to rates” for other products (like mortgages), added Barnes — which seems to be the consensus from other experts, too. The Federal Reserve sets the rate for the overnight exchange of money by banks; governors adjust the rate to help curb inflation or stimulate growth, depending on their assessment of what would be best for the economy. Although this rate is not the same thing as the mortgage interest rate that buyers pay when they take out on a loan on a home, movement of the Fed rate up or down can put pressure on mortgage interest rates. “With this increase well anticipated by most markets, Keller Williams does not expect any dramatic change in the current path of mortgage rates. Rates will likely continue to slowly rise this year barring a change in the economic situation,” said Ruben Gonzalez, staff economist, Keller Williams, in a statement. “While higher mortgage rates will likely have some downward impact on demand, housing remains very affordable by historic standards and we anticipate another year of healthy home sales despite an environment of increasing mortgage rates,” added Gonzalez.

Mortgage rates don't usually rise in tandem with the Fed's increases. Sometimes, they even move in the opposite direction.

That rate increase suggests that markets have already priced in Wednesday's rate hike and that mortgages might not respond immediately to the Fed's announcement. Unless and until, that is, the Fed signals that it plans to raise rates even faster than anyone expects.

Sources for this article: